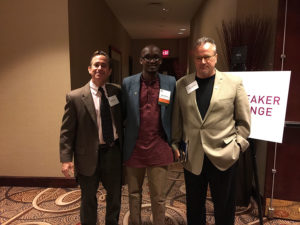 Over two very intense and inspiring days, the long time friends and fellow film makers met with and interviewed over thirty individuals.

“These people, their stories were extremely diverse and incredibly gripping!  In many cases their work in defiance of dictatorships put them at risk for their very lives.  By the end of each day we were physically and intellectually exhausted but even more inspired to join their noble work”

An on-line application process has been established through the Atlas Network’s website; the deadline is December 15, 2015.  Depending on the number of final applicants a group of semi-finalists will be selected by year end and finalists selected in January.  Tyler and Corcos plan to complete production and deliver the program by year end 2016.